All the Talk Probably Has Some Feeling Burned Out on Burnout, But Now Is No Time for Silence

You can run, but you can’t hide: Talk of physician burnout—commonly characterized as a loss of enthusiasm for work, severe emotional exhaustion and a low sense of accomplishment—is everywhere. The three major peer-reviewed journals serving the specialty published 45 articles mentioning burnout in just the first three quarters of this year. While radiologists may, if you’ll pardon the pun, be burned out on the topic, the conversation is really just getting started.

“There are lots of angles that we now have to think about, because change is needed for our wellbeing and the wellbeing of patients,” says Richard Gunderman, MD, PhD, vice chair of radiology at Indiana University.

Some observers suggest that one physician’s self-reported burnout is another’s normal work fatigue—meaning the entire concept of burnout has been blown out of proportion. Gunderman says this is “probably true” in the sense that, while the phenomenon exists and poses real problems for physicians, individual physicians’ tolerance for living with burnout varies as much as their tolerance for pain. But that’s no excuse for sweeping things under the rug.

“Variations aside, we as a specialty should by no means ignore radiologists’ complaints about being ‘burned out’—whatever that means for them,” Gunderman says. “We need to resist the temptation to say, ‘I know someone who does your job with no problems.’ Instead, if you see someone struggling, invite them to coffee or lunch and ease them into a conversation about how things are going. Offer to listen if they want to talk—and to do what you can to help.”

Syam Reddy, MD, a radiologist with Radiology Imaging Consultants in Harvey, Illinois, sees things similarly. “Physicians don’t all react in the same manner to the causes of burnout. Some personalities handle things one way, and some handle the same things another way,” he observes. “What’s important is that we address the issue, because it’s real.”

Nisha Mehta, MD, a musculoskeletal and breast imaging radiologist at the VA health center in Charlotte, N.C., has a slightly different take on the matter. “I think it’s true that burnout means different things to different people,” explains Mehta, a member of RBJ’s advisory board who has written and spoken extensively on physician burnout. “That being said, I don’t think the phenomenon of increasing physician dissatisfaction and fatigue is overblown.”

According to the most recent studies, Mehta adds, approximately 70% of physicians wouldn’t recommend a career in medicine to their children. “To me, that speaks volumes about the depth of the problem,” she says. “It’s a more powerful statement than the percentage of reported burnout, which I agree can be subjective.”

Jonathan Kruskal, MD, PhD, radiology chair at Beth Israel Deaconess Medical Center and chair of the radiology executive committee at Harvard Medical School, sees physician burnout through another type of lens. He believes it’s unwise to approach physician burnout by starting with the question of whether or not the matter is overblown.

“We would get far more buy-in on [dealing with] the current burnout crisis if we approached it from a stress perspective,” Kruskal says. “Stress can lead to burnout. Some physicians may be more resilient than others, but the fact that stress and burnout have led to physician suicide is sufficient for me, and hopefully my colleagues, to embrace this as a real and timely crisis.”

In light of these fortunately anecdotal yet always tragic outcomes, he suggests, it’s a waste of valuable time and energy “to even think about whether the entire phenomenon is being overblown.”

An emerging question in radiology is whether radiologists are more susceptible to burnout than physicians in other specialties. Medscape’s latest survey on burnout, released in January and based on responses from more than 15,000 doctors, shows an overall physician burnout rate of 44%. Radiology landed very close to the middle of the pack, at 45%. (Urologists self-reported the most burnout, at 54%, while public health & preventive medicine had the least, 28%.) However, a nationwide study published in Mayo Clinic Proceedings in 2015 showed radiologist burnout at a concerning 61%.

Wherever the true figure stands, it’s clear that radiologists face a unique set of stressors. These include turnaround time pressures, ever-increasing imaging volumes, declining reimbursements per study, isolation in the work environment, changes in the market and perceived livelihood threats from technological advances, among others.

“Most fields have their own specific challenges as well, and comparing which specialty has higher reported rates of burnout to another isn’t productive,” Mehta states. “The fact is that, across the country, all physicians are reporting increased burnout rates over time, and all specialties hover around at least half of their physicians reporting burnout.”

Apart from questions of susceptibility, what certainly merits discussion is radiology’s lackluster overall effort to prevent, identify and beat back burnout within its ranks, Mehta suggests. This is especially so in light of the heightened attention burnout has been getting.

“Awareness of physician burnout has increased dramatically over the past few years,” she says. “These days, you can’t open up a journal, go to a conference or even look at your social media feed without seeing something on the topic.” And while the constant din may make some feel “burned out on burnout,” it’s “a good thing we’ve recognized the problem,” Mehta adds. “The challenge now is how to address it. Across specialties, we haven’t done a great job at finding solutions to burnout that actually move the needle.” 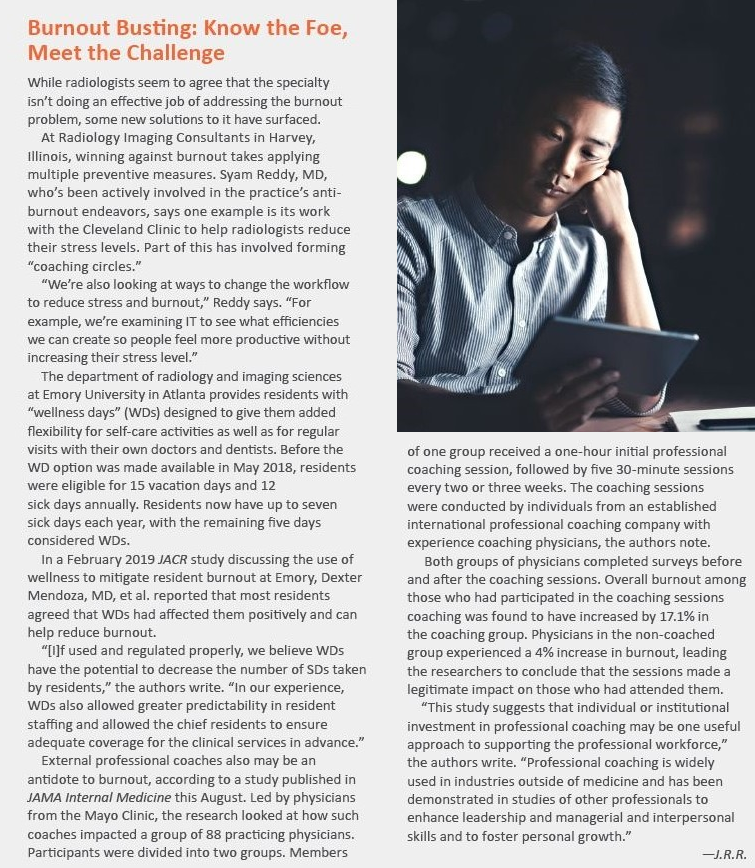 The ineffective specialty-wide response may be ripe for turning around, one practice at a time. Gunderman has observed that some radiology practices and departments have begun concertedly building a culture of collegiality, reduced emphasis on speed and mindfulness of radiologists having lives outside of work.

“All these lessen the likelihood of burnout,” Gunderman says. “But in many practices, this hasn’t happened. In those cases, it’s difficult for radiologists to reach out to each other, or the signs of burnout are ignored—or there’s a combination of these” and other pressing problems.

As Kruskal sees it, many practices place too much emphasis on preventing burnout—and not enough on fostering wellness. The two go hand in hand, he contends, so the one-sided approach will not work.

In light of this equation, radiology leaders would do well to come up with a to-do list of things that can help radiologists learn about, understand and promote workplace wellness. At the top of this roster Kruskal puts mastering the art of “identifying the manifestations of stress in the workplace.” He cites as an obvious example the art of handling “the disruptive physician.” Instead of focusing on teaching people to be less disruptive or not disruptive at all, Kruskal asserts, leaders could do more to proactively tackle toxic behavior head-on.

“There are many more subtle manifestations, such as loss of clinical productivity, loss of academic productivity, lack of interest in teaching, poor interpersonal communication skills and a host of other ways in which stress might manifest,” he observes.

Kruskal and colleagues take a deep dive into burnout-related imperatives for radiology leaders in a June 2019 JACR article, “A Roadmap to Foster Wellness and Engagement in Our Workplace—A Report of the 2018 Summer Intersociety Meeting.” The authors assert that high-functioning teams “are run by effective leaders who possess task, people, communication and diagnostic skills” and “must model excellence, foster open communication and build cultures of partnership and shared values. Trust, teamwork and collaboration create an environment of support that can mitigate burnout. To be effective, our leaders must create awareness, acknowledge wellness and insist on  its importance.” 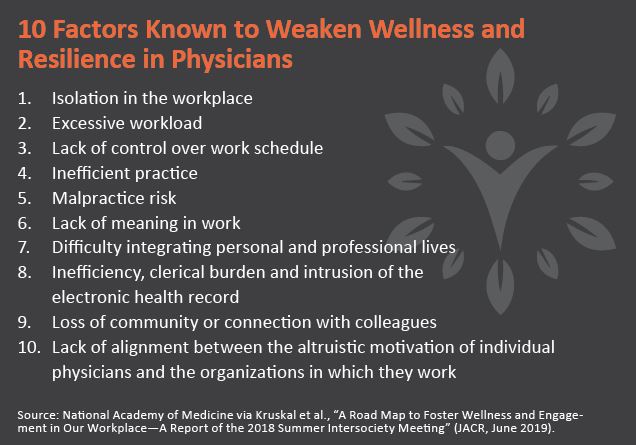 According to Mehta, radiology has allowed a numbers-driven bent—RVUs, dollars, volumes—to over-shadow the bigger picture of radiologist workforce sustainability.

“In an era of increasing shortages in the physician workforce, failure to address workforce sustainability is short-sighted,” she says. “If we don’t make it possible for radiologists to stay in the workforce long-term by including the consideration of career longevity in our decision-making process, we face a real threat to our field in the future.”

As part of burnout’s preventive medicine as well as its antidote, Mehta would like to see radiology leaders support more flexible work arrangements within groups. An example might be the option to work longer shifts on some days to have more family time on others or to work part-time or even remotely. She also wants those in positions of power to take radiologist input into account when thinking about implementing measures aimed at bolstering efficiencies, as well as when hashing out productivity-related compensation plans.

Also on Mehta’s radiology leader wishlist: more focused attempts by higher-ups to consider the needs of the radiologists they supervise. “In general, radiology leadership hasn’t shifted enough to reflect changing demographics in the field,” she says. As a result, leaders “may not identify personally with the struggles of younger members of the workforce.” The most effective burnout-busting leaders will keep such diversity concerns top of mind, she suggests.

Gunderman thinks radiology leaders should take responsibility for creating a culture that discourages individuals from chattering overmuch about “how much they put up with” at work—long hours, inflexible schedules, productivity pressures and so on. A culture built on bragging and boasting of this type drives people underground, he says. In practices demoralized by such cultures, it can behoove radiology leaders to designate staff members with good interpersonal skills as sounding boards for peers who need to let off steam.

“It’s critical for leaders to see that radiologists within a practice or department need to care for each other as humans, which means listening to and helping each other and refraining from making judgments,” Gunderman continues. “They should also acknowledge that there’s a bonus here: higher-quality care for patients.”

If the day comes when radiology leaders are entirely on board about recognizing and minimizing burnout, and measures to thwart burnout have been taken on a mass scale, will radiologist burnout recede to where it’s a very rare phenomenon?

“I don’t know about very rare—I’m not an optimist by nature,” Mehta replies. However, she expects supply and demand economics to largely contain the flames. “I think there will come a day where we hit a tipping point and productivity starts decreasing,” she adds. “Then we will have to fundamentally reconsider how we approach workloads in radiology, funding for physician training spots and physician compensation. When these things come together, some of the pressures radiologists face today—and the subsequent burnout—will be alleviated.”

Although Kruskal would like to believe the future will bring less burnout among radiologists, he says it’s imperative to acknowledge that new burnout-inducing stressors are likely to arise even as existing ones are tamped down. For this reason, he says, the emphasis on wellness he so strongly advocates will become increasingly important.

“I cannot overemphasize the importance of effective leadership” in controlling burnout in the future, Kruskal adds. “Leaders are known to both mitigate and produce stress in the workplace. It’s very important that our current and future leaders receive appropriate training and develop skills that allow them to identify stressors. They need to work at developing high-functioning teams.”

Gunderman seconds the motion. “If leaders and their teams develop a culture where we’re attuned to the threat of burnout and can help each other achieve harmony between what we hope to contribute as humans and the work we do daily, we will all reap big benefits,” he says. “It takes a village.”